To comprehend the struggle The Friends of Vintage Roses face working to save 3500 old rose varieties, we offer this aerial view of the garden, the pots and roses we must care for, and pass along to others who’ve volunteered to help us preserve.

This image comes from 2 years ago, just prior to our work to remove blackberries from the garden and from swallowing 4000 roses in containers. Around the perimeter of the 3 acre site are rows and rows of roses in plastic pots.

Your donations will aid us in weeding, repotting with fresh soil, feeding and mulching these roses. Many will be adopted by groups assisting the Friends. Others will bear new growth this summer that we will use to strike cuttings from, to share with others, and pass on in our yearly sale to supplement donations that keep us going. Step back to the 1990s for a glimpse of that beauty with me! 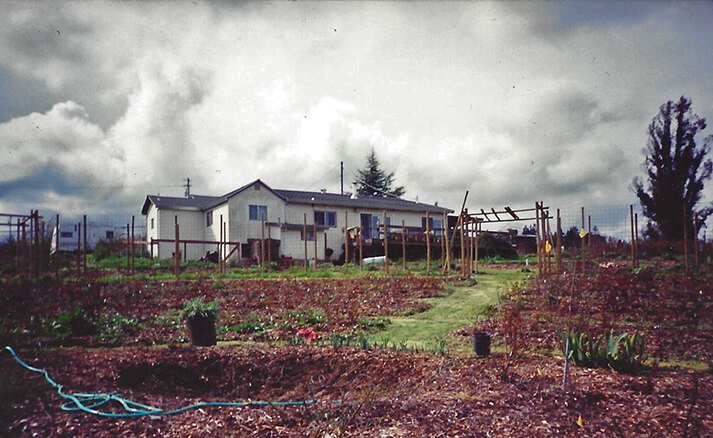 In 1992–3 stage 3 of this garden was developed and planted: 983 Hybrid Teas and Floribundas in an amphitheater, surrounded by 300 Hybrid Perpetuals, Bourbons, Ramblers and species roses. At the top a long arbor with three pergolas and parallel walls of old climbing roses.

An explosion of roses, 1994. A young nurseryman answers questions.

The Celebration of Old Roses in El Cerrito, California brought together a great community of lovers of old roses when it began in the 1980s. That community embraced the Vintage collection of historic roses and supported the building of a garden to display these living treasures. The many friends we made back then have continued to the present to make a difference. Dr. Gene Peck of Oakland stepped up to make certain we got a start with a site for the roses to live. It is fitting that today this collection belongs to the world, to all of the Gene Pecks in it, the friends of vintage roses.

Please note: our Dirt Day for April 7th has been cancelled due to heavy rain and flooding. Our next scheduled date is Sunday, June 15th.
Next Saturday, April 7th will be our first Dirt Day of 2018. I am very excited to have your help in continuing our work.
The rose adoptions project was very successful last year. On March 1st, just one month ago, we sent more that 250 roses on a truck bound for Southern California and the California Coastal Rose Society, a group that has dedicated itself to preserving roses for generations to come. They agreed last summer to adopt our entire Hybrid Tea collection. This winter we were able to pass to them all of the roses that we had growing in containers. In May we’ll begin rooting varieties from the garden that did not go to them.

This project underlined the massive amount of work we have in caring for several thousand roses in pots. Enlisting others to care for them makes our work here much easier, and fewer roses will suffer and be lost because we cannot care for them well.

Our first work will be to apply organic fertilizers and compost to the pots that we have cleaned in the container collection. It’s a job we can do without getting very dirty, or very wet if the predicted light showers actually happen on Saturday. Good news it that it will be cool for our work.
We begin at 10 am, so do try to be early. Parking is a bit tight, but we always make it work.
You’ll want to bring a lunch; we stop at 1 pm and eat on the deck or in the house. Coffee will be ready for those who wish when you arrive.
A few tools will be useful:
Gloves
Hand pruners
Garden shoes and clothes
Kneelers for those who are helping to weed
I can’t wait to see you on Saturday!
PLEASE PLEASE email me to confirm you plan to come. It helps me to be prepared for the tasks. volunteercoordinator@thefriendsofvintageroses.org
Your friend and rose curator,
Gregg Lowery
PS: before we begin I’ll show you our amazing progress on the old rose garden. We have been planting like crazy!

Over the past week we’ve measured 4 inches of rain here in the Friends’ garden of old roses. That drenching bodes well for the year to come as the old European section of the garden has come full circle from a tangled, secret garden to a bright open haven for flowers. Our 2017 Blackberry eradication project has been a great success, supported by the help of many volunteers, and brought to fruition with the donations of many, including some very large gifts.

This May and June I hope you can come to visit the old roses. We have laid out more than 90 plants of rose varieties we had lost or nearly lost, and to their numbers have added new companion plantings the likes of which this old rose garden has never seed. We are fighting the incursion of weeds and berry plants by covering the earth with plants. We expect an explosion of blooms, and you should not miss this.

Though I will not host an open garden, I hope you can come on the weekend of the Celebration of Old Roses, held this year in Albany, near El Cerrito. The Bay Area Heritage Roses Group has been helping me for more than a decade to cut blooms for display at that wonderful event. Saturday, May 19, will be our flower picking day in the old rose garden. Please come join us then and share the beauty with us.

Please note: our first Dirt Day will be Saturday, April 7th. Check our Dirt Days page for the full 2018 schedule. 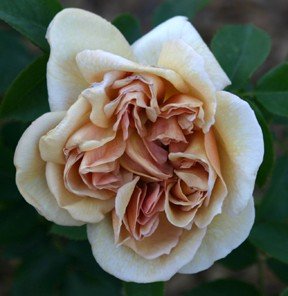